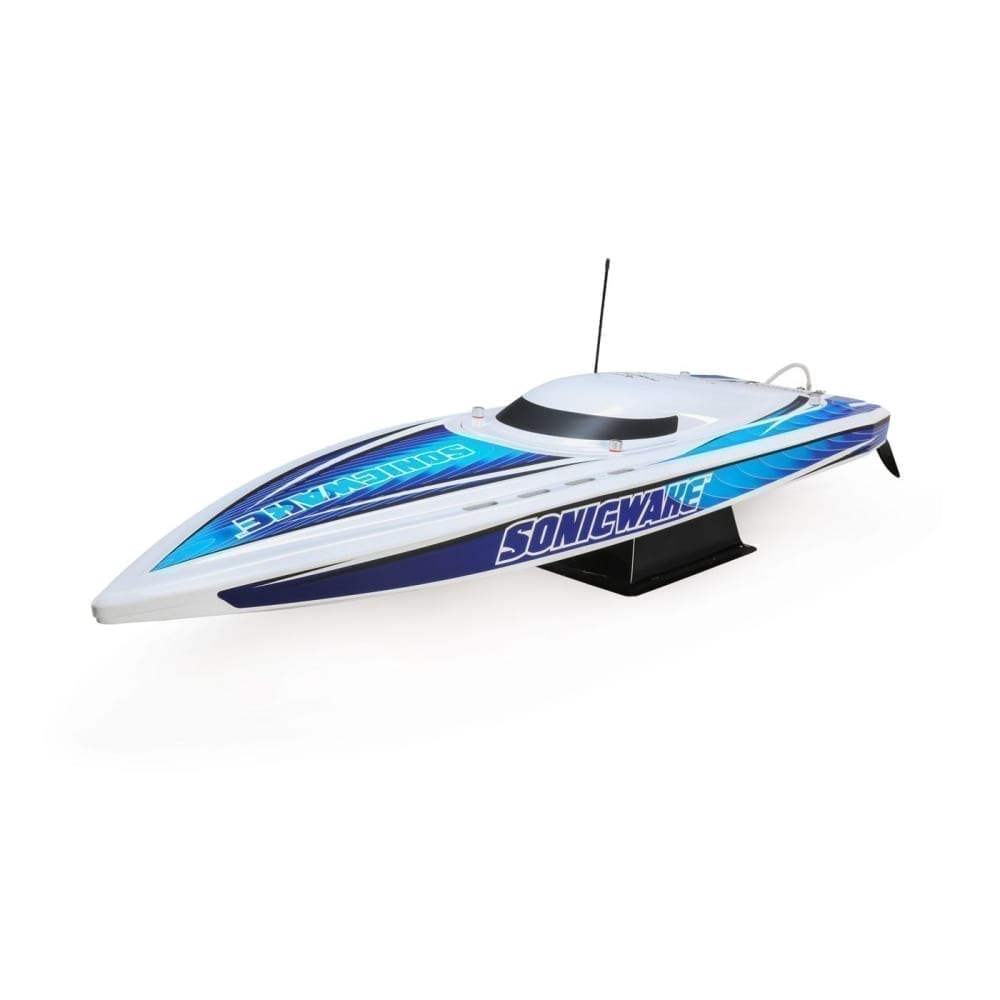 Unboxing the new Proboat Sonicwake mono had me thinking the exact thing I’ve thought while opening the other half dozen Proboats I bought this year, which was why the hell cant TFL package their RTR’s with everything attached and ready to go like these. Rudder, turn fins and prop already attached with the hard foam cutout to protect everything back there. That piece comes in very handy also when transporting these in the back of the car for protection even on my PVC pipe boat stand.

The controller is nice and simple as expected, with a choice of max throttle settings via switch rather than knob that can’t be bumped without knowing. 4x AA batteries are supplied for the controller which is a nice touch.

The hatch is attached via 4x knurled nuts and it has a seal inside, another obvious thing TFL could adopt for their RTR’s. The centre battery tray has 3x velcro straps easily large enough for my pair of Maxamp 3s 6500mah packs. ESC plugs are EC5 which are more than adequate for this setup. The physically tiny 120a esc obviosuly does the job well enough as its fitted to every proboat model I’ve ever used without issue. Motor is a 6s friendly 1900kv 36mm. Being a light plastic fantastic hull I wouldnt expect the heat issues associated with the 2075kv fitted to TFL genesis, pursuit etc. I was surprised to see the prop isnt plastic but cnc alloy. It looks to have a ton of pitch so I know not to expect anything fast out of the hole from a dead stop. Plastic motor tray is neat and tidy with motor being removable via 4x down facing m4 bolts by the looks, no need to get to the motor bolts while still in the boat which is always nice.

Turn on radio, plug batteries up and turn on esc switch then wait for the 6 beeps as per usual, check rudder and prop direction, all good. I decided to set the batteries all the way back for max speed as the factory setting on the tabs is angled way down, certainly more negative angle than I would have expected and near the point where I would be concerned if I had to run that much angle on  any other boat. I cut a piece of foam about 75mm long to jam in front of the lipos, added a few sheets of paper towel under the straps and off I went.

On first pull of the throttle the high pitch prop becomes evident, plenty of rpms, plenty of spray then a little later the boat takes off. Its obvious your driving a plastic boat straight away. Its nimble and turns OK but not very stable at full noise. The slightest ripple creates unstability and it wasnt long before I got to test out the self righting function which I must say works brilliantly! Ive owned a lot of boats with this feature but none work even close to this, some dont even work at all it has to be said. After 2-3 mins I bought the boat in to slide the batteries forward, my paper towel was damp but as expected, motor,esc and wires feel a little warm but fine. With the batteries forward its easier to drive at speed as you would expect, but still flighty and had the awful traight of nose diving (twice). It certainly needs some tweaking and is not very forgiving, but its pretty fun to drive, not as stable as a spartan at the same speed, and not in the same league as a the smaller 32″ TFL pursuit for stability or high speed turns.

After the second run the motor, esc were reasonably warm, batteries OK but wires a little toward the hot side. I was running in a fairly small area and only able to reach full speed for 2 seconds at a time which would be the cause of the higher than desireable temps. Rough total run time would have been around 6-7 minutes all up.

All in all seems a pretty good boat but requires a bit of setup to get the most out of it. I doubt there is much room in the hull design for increased power/speed if you want to keep it in the water. The hull is shoebox design at the join so ultra cheap to manufacture and I think a little overpriced compared to the old fibreglass Voracity model, but the flood chamber works very well and thats a big plus.